Already in years 1885 and 1896 Gottlieb Daimler and Rudolf Diesel carried out research on increasing power output and decreasing fuel consumption of their engines through initial compression of air. The first turbocharger’s application was limited to very big installations, e.g. ships’ engines. Turbocharging entered the automotive industry with truck engines. In 1938 the company "Swiss Machine Works Saurer" built the first turbocharger dedicated for trucks. Alfred Büchi, Swiss engineer was the first who in 1952 successfully combined turbocharging with the exhaust achieving the increase in engine’s output of over 40%. Since than, step by step the turbocharging gained popularity in automotive industry. 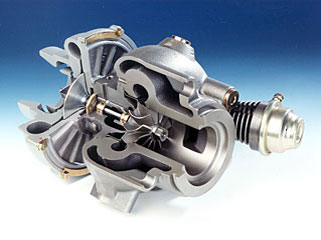 Chevrolet Corvair Monza and Oldsmobile Jetfire were the first personal cars to use the turbines in order to increase the engine power in the turn of 1962/63. Regardless of successfully increasing the power output they were quickly off the market due to high rate of failures.
The real breakthrough in turbocharging personal cars was achieved in 1978 with the introduction of turbocharged diesel engine in the Mercedes Benz 300 SD followed in 1981 w by the VW Golf Turbodiesel. The importance of turbochargers in personal cars increase with the increase of their efficiency and decrease in exhaust gases emission.
Today the turbocharging of petrol fueled engines is considered primarily not in the context of power output but rather due to decrease in fuel consumption and lesser environmental impact.
After the first oil crisis in 1973 the turbocharging was incorporated for good in the truck engines. The higher investment costs associated with the turbocharging were offset by the savings on lower fuel consumption. Additional increase in number of turbochargers in trucks was forced by stricter regulations concerning the emission of exhaust gases introduced in the years ’80. Today every truck is fitted with turbocharger.
In the years ‘70 turbochargers were first used in the motor sports, specifically in Formula 1 races and since than the popularity of turbocharging in personal cars grows steadily. The word "turbo" became trendy. In those times almost every car maker used to offer at least one top model of petrol fueled car fitted with the turbocharger. This phenomenon disappeared after few years because although turbocharged petrol engines achieved higher power output they were not fuel effective. Moreover the susceptibility of turbocharger to changing operating conditions was in those time quite high therefore it was not accepted by general public. 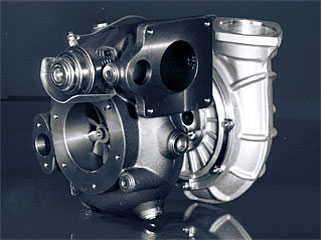 However the fascination with turbocharging from years ‘60 and ‘70 continuous and the most important reason for installing turbochargers is the role of exhaust gases energy in improving fuel consumption and limiting the emission of toxic substances. Therefore the turbochargers contribute to protection of natural environment and conservation of energy from natural resources.